The Dolomites – Our World Heritage Site

There is no mountain range in this world that resembles the Dolomites, legitimately declared the 8th wonder of the world by natural scientists. Playfully scattered rock forts line up along neatly aligned mountain ranges. Truly a wonder of nature! Their diversity makes the Dolomites a paradise for natural history experts, a playground for alpinists and mountaineers, a hiker’s ballpark and a haven for nature lovers.
Facebook
Unterpfaffstall-Hof 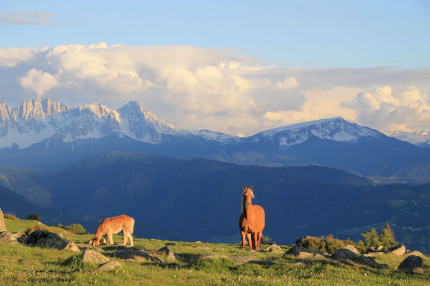 The Dolomites are known to be unique for their enticingly beautiful appearance, but their evolution is just as extraordinary. Unlike most mountain ranges created through either tectonic forces elevating and folding rock material or through volcanic activities, the Dolomites’ origin lies in the ancient tropical Tethys Ocean of the Triassic Period. In the warm waters of this Ocean, mountains consisting of coral reefs and limestone were formed by organisms and sedimentary matter.

Named after geologist Deodat de Dolomieu, the “pale mountains” were declared a UNESCO World Heritage Site due to their unique and outstanding beauty.

The “pale mountains”, so called because they were brighter than all the surrounding mountain ranges, have always had a say in the shaping of their inhabitants and they make South Tyrol what it is.

Ours is a region of contrasts:

Inhabited by Ladin, German and Italian native speakers, from tourist centers to authentic and remote valleys, from hot and dry summers with a Mediterranean climate to long cold winters, from Alpine ski resorts to Mediterranean bathing lakes, from intensely cultivated orchards to traditionally farmed alpine pastures, from simple mountain farms to internationally active companies, from bustling shopping streets to the small local country store, from the 5-star hotel with all the amenities one expects to the unique experience of a farm stay. All of this, and so much more, makes up the land that we live in - a land created by the Dolomites. OK
This website uses cookies. The use of cookies is regulated in European Directive 2009/136/EC (E-Privacy). We also use the Facebook pixel and Remarketing technologies from Google. By clicking on "OK" you agree. To protect your privacy, you can customize your preference management regarding online advertising in the current browser here. To stop third-party tracking technologies used on this website from using your information for personalized online advertising, click "Opt-Out".